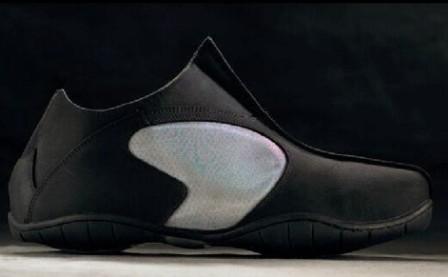 Ronald Demon designed an all-purpose shoe that automatically adapts to the wearer's needs, adjusting the cushion to suit the pace of the activity in which he or she is engaged. Called the "smart shoe", patent number 5,813,142 was issued to Ronald Demon for a "shoe sole with an adjustable support pattern."

Sixteen year old Ronald Demon first came up with the idea for an adjustable shoe sole, playing basketball in Miami Florida. After long practices on the hardwood courts, Demon needed to find a way to relive the aches and pains in his feet so he  designed an all-purpose shoe that automatically adapts to the wearer's needs, adjusting the cushion to suit the pace of the activity in which he or she is engaged. The 21 year old completed his design while a senior at the top-rated Massachusetts Institute of Technology (MIT), majoring in electrical engineering and computer science. He earned the Lemelson Foundation's recognition for his inventions which a patented computerized adjustable shoe. Demon's other inventions include personalized search engine technology, and a Virtual Server.

Ronald's Demon's invention is described in the patent papers: "The invention relates generally to a shoe having an adjustable support-pattern and more specifically to a shoe that selectively measures and adjusts the pressure in a number of zones beneath the user's foot as the user's foot impacts the traveling surface." The harder the user is working, the softer the cushion. Adjustments are made by sensors which regulate the flow of fluid from strategically placed bladders to adjust the cushion. Massachusetts based VectraSense, founded in 1999, is an MIT technology company which develops and licenses its patented computerized footwear technologies to a number of footwear manufacturers, including this smart shoe now being tagged as Verb for Shoe.

Verb for Shoe is a sensor feedback design that self-adjusts to improve comfort and performance according to the wearer's movements by way of an embedded computer within the shoe. Installed within the sole of the shoe is ShoeDoctor, a software application which continuously monitors the shoe's health and alerts when problems occur. It actively monitors power usage, air bladder system performance, and motion analysis. When a problem does occur, Customer Support at VectraSense can connect to your shoes across the internet to assist in resolving issues. The shoe design moves to a second level by letting you social network with fellow Verb for Shoe owners. Stand close enough, and you can exchange business cards and other information through wireless communication between their shoes. And, much like software updates and upgrades becoming more common with products like Apple's iPhone, Verb For Shoe has the ability to load new software applications in the future.

With this wiz-bang factor and the $700 price tag, the shoes are designed for those that want to make a statement with plenty of discretionary income to spare.