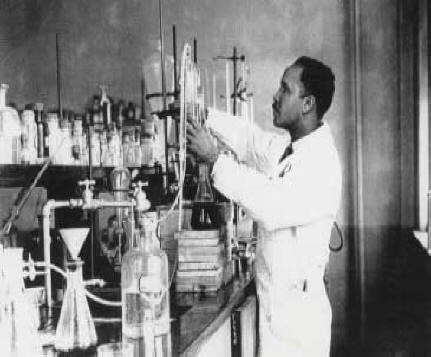 Percy Lavon Julian was born on April 11, 1899 in Montgomery, Alabama. His grandparents had been slaves, and despite the fact that the Emancipation Proclamation was issued more than thirty years prior to his birth, Jim Crow laws still left African Americans with little opportunity. Percy's father was a railroad mail clerk, and his mother was a teacher and they valued education, and encouraged Percy and his siblings to get the educations that they themselves did not have. With the limits of segregated schools, getting any education was difficult for Southern Blacks, and going to college was nearly impossible.

Julian went to a segregated elementary school that didn’t teach any science. He couldn’t go to high school because there was no high school for African Americans in Montgomery. Instead, he went to the Alabama State Normal School, a school for blacks that taught practical skills like blacksmithing and hat making, and trained teachers for black schools. It too offered little or no science. Julian had read about science in his father’s library at home, and chemistry fascinated him. He soon decided he wanted to be a chemist.

In 1916, with the help of a teacher named Joan Stuart at the Normal School, Percy Julian entered DePauw University in Indiana to study chemistry. The college accepted few African-American students, and the segregated nature of the town forced social humiliations. Julian was not allowed to live in the college dormitories and first stayed in an off-campus boarding home, which refused to serve him meals. It took him days before Julian found an establishment where he could eat. He worked firing the furnace and doing other odd jobs in a fraternity house. In return, he was allowed to sleep in the attic and eat at the house. Julian graduated from DePauw in 1920 Phi Beta Kappa and valedictorian.

Julian wanted to obtain his doctorate in chemistry, but learned it would be difficult for an African American. After graduating from DePauw, Julian became a chemistry instructor at Fisk University. He then received an Austin Fellowship in Chemistry and went to Harvard University in 1923 for his M.S. Worried that white students would resent being taught by an African American, Harvard withdrew Julian's teaching assistantship, making him unable to complete his Ph.D. Leaving Harvard, Percy Julian found a job as an instructor at Howard University.

In 1929, while an instructor at Howard, Julian received a Rockefeller Foundation fellowship to continue his graduate work at the University of Vienna, where he earned his Ph.D. in 1931. He studied under Ernst Späth and was considered an impressive student. In Europe, he found freedom from the racial prejudices that had nearly stifled him in the States. He freely participated in intellectual social gatherings, went to the opera and found greater acceptance among his peers.

Returning to the United States Percy Julian worked at Howard, then DePauw where he was appointed a teacher in organic chemistry. At DePauw, he worked with an associate of his from Vienna, Dr. Josef Pikl, on the synthesis of physostigmine, a drug which was used as a treatment for glaucoma. After much work and adversity, Julian was successful and became internationally hailed for his achievement. At this point the Dean of the University sought to appoint Julian to the position as Chair of the chemistry department but was talked out of it by others in the department, again because of concerns over reaction to his race.

In late 1935, Percy Julian decided to leave the world of academics and entered the corporate world by accepting a position with the Glidden Company as chief chemist and the Director of the Soya Product Division. This was a significant development as he was the first Black scientist hired for such a position and would pave the way for other Blacks in the future. The Glidden Company was a leading manufacturer of paint and varnish and was counting on Julian to develop compounds from soy-based products which could be used to make paints and other products. Julian did not disappoint, coming up with products such as aero-foam which worked as a flame retardant and was used by the United States Navy, saving the lives of countless sailors during World War II.

Percy continued his success as he next developed a way to inexpensively develop male and female hormones from soy beans. These hormones would help to prevent miscarriages in pregnant women and would be used to fight cancer and other ailments.

One of Percy Juilian's greatest discoveries was creating a synthetic form of cortisone. In 1948 scientists at the famous Mayo Clinic in Minnesota discovered that the human hormone cortisone was good for treating arthritis, a disease of the joints in humans. Animals make cortisone naturally, but not very much of it. For example, you would have to slaughter 167 cattle to get one gram of cortisone. So natural cortisone was very expensive, and not many arthritis patients could afford it. The cortisone that had cost $700 per gram could now be made for about 50 cents per gram. Just as Julian made physostigmine affordable for glaucoma patients, he now made cortisone affordable for arthritis patients. Julian had made yet another great breakthrough

Despite Percy Julian's education and contributions to society, he was still treated as a lower class citizen on many levels so he moved more of his concentration to fight for civil rights, joining the NAACP and Urban League to help bring equal housing opportunities for blacks.

Julian and his family also came face-to-face with adversity and violent, racist threats and acts. When they moved into an upscale, predominantly white neighborhood in a suburb of Chicago, the family received death threats. Arson attempts were made on the house. Like everywhere else in his life, Julian set an example by standing up for his ideals. He was not intimidated. "To leave would have been cowardly and wrong. The right of a people to live where they want to, without fear, is more important than my science and my life to bring a halt to this senseless terrorism," he believed.