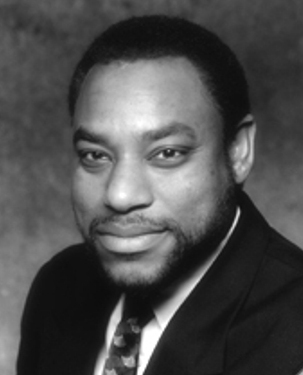 Derrick Pitts is the chief astronomer of the Fels Planetarium in Philadelphia. A St. Lawrence University Trustee, Derrick H. Pitts was named one of the "50 Most Important Blacks in Research Science" for 2004.

Derrick Pitts was born and raised in the Tioga-Nicetown section of Philadelphia.  He always knew he wanted a career in either astronomy or space sciences. While still a youngster Derrick Pitts took am interest in the Mercury space flights, and was enthralled with the fact that astronauts such as Alan Shepard, Gus Grissom and John Glenn were going to fly in space. When he was a kid, Jupiter had nine moons (now 63), Saturn had twelve (now 61), and Pluto was a planet.

In school Derrick Pitts remembers reading a "Scientific American" article about how spectra of the most distant galaxies told the story of the expansion of the universe., and recalls "I looked into the sky with a totally different understanding of it than I had just a few hours before".

Derrick Pitts graduated from St. Lawrence University where he was a member of the Laurentian Singers, a select undergraduate vocal ensemble that performs both on and off campus throughout the year.

Derrick Pitts was hired by The Franklin Institute to work in the observatory as a rising junior in college. That turned into full-time employment when he graduated and he had great work and educational experiences since 1978, designing and presenting many of the museum’s public programs and exhibits.  He became the  original director of the Tuttleman OMNIMAX Theater, museum vice-president and many other valued positions. He has been Chief Astronomer and Director of the Fels Planetarium since 1990.

In April of 2009 Derrick Pitts hosted the 100 Hours of Astronomy Opening Event at The Franklin Institute in Philadelphia. The event also featured world-renowned Galileo expert Dr. Paolo Galluzzi. The interactive educational event showcased Galileo's original telescope on loan for an exclusive exhibition entitled "Galileo, the Medici and the Age of Astronomy". 100 Hours of Astronomy was a venture of breathtaking scope that sought to involve people from all walks of life around the globe and conveyed a multitude of messages, from the personal benefit of astronomical knowledge to the pressing issue of curbing light pollution.

Derrick Pitts was one of only three non-NASA guests invited to the White House "star party" on the South Lawn on October 7, 2009. Pitts set up the telescope near President Barack Obama's podium; both the President and Michelle Obama used the telescope to see a rare "double-double" star on the occasion. Some 150 school children in the Washington area were also guests at the party, which featured a number of telescopes set up for observation of the night sky.

Active in the community, Derrick Pitts finds time to visit school classes and is a member of the Tuskegee Airmen Incorporated, Philadelphia chapter. His career has been recognized with one of Philadelphia's highest honors, the Liberty Bell Award. He is also a recipient of the George Washington Carver Scientist of the Year Award and is a 2004 inductee into the Germantown Historical Society's Hall of Fame