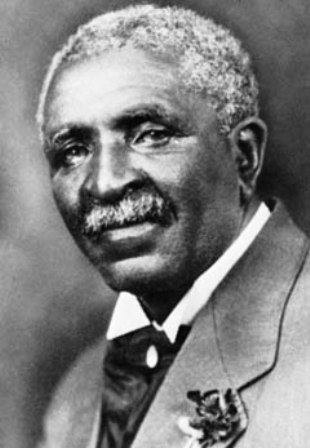 George Washington Carver was an African American agricultural chemist, agronomist, and experimenter whose development of new products derived from peanuts, sweet potatoes, and soybeans helped revolutionize the agricultural economy of the South. He taught and conducted research at the Tuskegee Normal and Industrial Institute in Tuskegee, Alabama.

George Washington Carver was born into slavery in Missouri on the Moses Carver plantation sometime around 1861. His parents were slaves, but George Washington Carver had no memories of them. His father died right before George was born, then while he was still a baby, slave traders kidnapped him and his mother. Only George was returned to the plantation. George was a sickly child and was unable to work in the fields. He spent time working in the household and began his love and study of plants at a young age. Carver also began to learn to draw, and would spend his spare moments drawing in the fields.

After the Civil War, George Washington Carver was freed as a slave, but continued to live with the Carver's until he was twelve. During that time Susan Carver taught him basic reading and writing skills. Thirsting for Knowledge, George Washington Carver set out to find a black school to further his education. At the age of thirteen George Washing Carver traveled to Fort Scott, Kansas, in the hopes of attending the black school there. After witnessing the beating to death of a black man at the hands of a group of white men, George left Fort Scott. He subsequently attended a series of schools before earning his diploma at Minneapolis High School in Minneapolis, Kansas.

After attending high school in Kansas, Carver was accepted as the first black student to Simpson College in Indianola, Iowa. With aspirations of having a career in science, Carver transferred to the Iowa Agricultural College (now known as Iowa State University.) In 1894, Carver gained his Bachelor of Science degree and earned his Master of Science in bacterial botany and agriculture in 1896. Dr. Carver became the first black faculty member of Iowa College.

Carver left Iowa for Alabama in the fall of 1896 to direct the newly organized department of agriculture at the Tuskegee Normal and Industrial Institute, a school headed by the noted black American educator Booker T. Washington. At Tuskegee, Washington was trying to improve the lot of black Americans through education and the acquisition of useful skills rather than through political agitation. Stressing compromise and education, Booker T. Washington's beliefs were summed up in his "Atlanta Compromise Speech". Despite many offers elsewhere, George Washington Carver would remain at Tuskegee for the rest of his life.

At Tuskegee, Carver developed his crop rotation method, which alternated nitrate producing legumes, such as peanuts and peas, with cotton, which depletes soil of its nutrients. Following Carver's lead, southern farmers soon began planting peanuts one year and cotton the next. While many of the peanuts were used to feed livestock, large surpluses quickly developed. Carver then developed 325 different uses for the extra peanuts, from cooking oil to printers ink. When he discovered that the sweet potato and the pecan also enriched depleted soils, Carver found almost 20 uses for these crops, including synthetic rubber and material for paving highways.

Among Carver's many honors were his election to Britain's Society for the Encouragement of Arts, Manufactures, and Commerce in 1916 and his receipt of the Spingarn Medal in 1923. Late in his career he declined an invitation to work for Thomas A. Edison at a salary of more than $100,000 a year. Presidents Calvin Coolidge and Franklin D. Roosevelt visited him, and his friends included Henry Ford and Mohandas K. Gandhi. Foreign governments requested his counsel on agricultural matters: Joseph Stalin, for example, in 1931 invited him to superintend cotton plantations in southern Russia and to make a tour of the Soviet Union, but Carver refused.

In 1940 Carver donated his life savings to the establishment of the Carver Research Foundation at Tuskegee for continuing research in agriculture. During World War II he worked to replace the textile dyes formerly imported from Europe, and in all he produced dyes of 500 different shades.

After a lifetime of achievements, recognitions and awards, Dr. Carver died in 1943, and is buried on the campus at Tuskegee. Upon his death, Franklin D. Roosevelt sent this message, "All mankind are the beneficiaries of his discoveries in the field of agricultural chemistry. The things which he achieved in the face of early handicaps will for all time afford an inspiring example to youth everywhere."