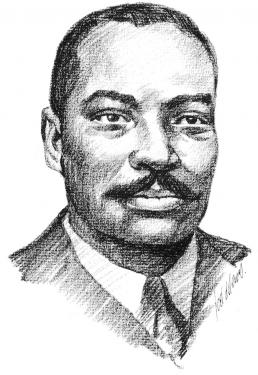 Granville T. Woods was an African American inventor who had at least 50 government patents on his many inventions. More than a dozen of these patents were inventions for electric railways but most of them were focused on electrical control and distribution. His most remarkable invention, however, was the induction telegraph, a system for communicating to and from moving trains. Many referred to Granville T. Woods as the black Thomas Edison.

Born on April 23, 1856 in Columbus, Ohio, Granville T. Woods attended school sporadically until he was ten years old and then went to work. Woods further educated himself by working in railroad machine shops and steel mills, and by reading about electricity. He often had friends check out library books for him, since African-Americans were excluded from many libraries at the time. In 1874 Woods moved to Springfield, Illinois where he worked in a rolling mill. He moved to the East in 1876 and worked part time in a machine shop. He took also took mechanical engineering course in an eastern college.

In 1878, Granville Woods became an engineer aboard the Ironsides, a British steamer, and, within two years, he became Chief Engineer of the steamer. Even with this background and all his engineering skill he was unable to get anywhere in these jobs. His travels and experiences led him back to Ohio, where he settled in Cincinnati.

Though Woods was mostly self-taught, he managed to absorb enough knowledge of electrical engineering to invent "telegraphony," a process that was later purchased by Alexander Graham Bell's company.

Allowing operators to send and receive messages more quickly than before, telegraphony combined features of both the telephone and telegraph. The Bell Company's purchase of this invention enabled Granville Woods to become a full-time inventor.

Among Granville Woods' later inventions was the multiplex telegraph. A success in the powerful railroad industry of the late nineteenth century, the device not only helped dispatchers locate trains, but also allowed moving trains to communicate by telegraph. This invention was so useful that Woods found himself fighting patent suits filed by none other than Thomas Edison. Woods eventually won, but Edison continued to pursue the telegraph by offering Woods a lucrative partnership in one of Edison's businesses. Woods refused, preferring to be independent.

After receiving the patent for the multiplex telegraph, he reorganized his Cincinnati company as the Woods Electric Co, but in 1890 he moved his own research operations to New York City, where he was joined by a brother, Lyates Woods, who also had several inventions of his own. During the next few year Granville T. Woods  received patents for an improved air-brake system, and by the time of his death on January 30, 1919, Granville T. Woods had some 60 patents, many of them assigned to the major manufacturers of electrical equipment that are a part of today's daily life.