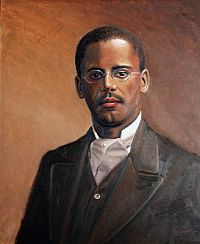 Louis Latimer received a patent for an improved process for manufacturing the carbon filaments in light bulbs. These improvements allowed for a reduction in time to produce and an increase in quality. During his life time he had worked with and for Alexander Bell, Hiram Maxim and Thomas Edison. Latimer was the only black member of the exclusive social group, the Edison Pioneers

Lewis Howard Latimer was born in Chelsea, Massachusetts on September 4, 1848 as the youngest of the four children of Rebecca and George Latimer. Both of Lewis Latimer's parents were slaves just a few years before his birth. George Latimer had been the slave of James Gray of Virginia, and his mother was owned by a different man. Both George Latimer and his wife Rebecca ran away to freedom in Trenton, New Jersey in October of 1842.

When Gray, the owner, appeared in Boston to take them back to Virginia, it became a noted case in the movement for the abolition of slavery, gaining the involvement of such abolitionists as William Lloyd Garrison. Eventually funds were raised to pay Gray $400 for the freedom of George Latimer.

As a youngster Lewis Latimer attended Phillips Grammar School in Chelsea, where he showed an aptitude for mathematics. Because the family often needed money, Latimer sometimes left school to work with his father.

In 1858, Latimer's father left the family and his mother found work aboard a ship. With no parents at home, Latimer and his brothers were sent to a state-run school where students were taught vocational skills such as farming. Latimer quickly made plans with one of his older brothers, William, to escape to Boston, where they both hoped to find work. After reaching Boston, the two boys discovered that their mother had returned home.

Although he was reunited with his family, Lewis Latimer had to find work to help support himself, his mother, and his brother. Finding only opportunities in manual labor, Latimer searched for a job that would allow him to grow intellectually. He finally secured a job with a law firm and was quite happy. Unfortunately, the start of the American Civil War interrupted his career.

Lewis Latimer joined the U.S. Navy at the age of 15 on September 16, 1863. After receiving an honorable discharge from the Navy on July 3, 1865, he gained employment as an office boy with a patent law firm, Crosby Halstead and Gould, with a $3.00 per week salary. He learned how to use an L square, ruler, and other tools. Later, after his boss recognized his talent for sketching patent drawings, Latimer was promoted to the position of head draftsman earning $20.00 a week by 1878.

In 1880, Lewis Latimer was hired by Hiram Maxim of the U.S. Electric Lighting Company to help develop a commercially viable electric lamp. Edison's prototypical light bulb was lit by a glowing, electrified filament made of paper, which unfortunately burnt out rather quickly. Latimer created a light bulb with a filament made of the much more durable carbon. He sold the patent for the "Incandescent Electric Light Bulb with Carbon Filament" to the United States Electric Company in 1881. He also patented a threaded wooden socket for light bulbs and supervised the installation of electric street lights in New York City, Philadelphia, Montreal, and London.

Lewis Latimer was married to Mary Wilson in 1873, and they had two children. He was also a brilliant poet and playwright, who also painted and played the flute. His poems were published as Poems of Love and Life. He even wrote a poem that was read at his wedding entitled Ebon Venus, which was included in his book of poetry:

Of eyes of blue and golden hair;
My heart like needles ever true
Turns to the maid of ebon hue.

I love her form of matchless grace,
The dark brown beauty of her face,
Her lips that speak of love's delight,
Her eyes that gleam as stars at night.

O'er marble Venus let them rage,
Who sets the fashions of the age;
Each to his taste, but as for me,
My Venus shall be ebony.

In 1884, Latimer became an engineer at the Edison Electric Light Company where he had the distinction of being the only African American member of "Edison's Pioneers", Thomas Edison's team of inventors. While working for Edison, Latimer wrote Incandescent Electric Lighting, the first engineering handbook on lighting systems.

Latimer was one of the founding members of the First Unitarian Church of Flushing, New York. The church began to have informal meetings in 1905, and incorporated in 1908 with Latimer being a charter member.

Lewis Latimer also used his skills to help immigrants by teaching drawing and English at the Henry Street Settlement House. He was involved in patriotic activities with the Grand Army of the Republic (GAR), and he was also active in civil rights work as well.

Lewis Latimer's other patented inventions include such diverse items as the first toilet for railroad cars in 1874, and a forerunner of the air conditioner in 1886. Although today's light bulbs use filaments of tungsten, which lasts even longer than carbon, Latimer will always be remembered for making possible the widespread use of electric light, in public and at home.