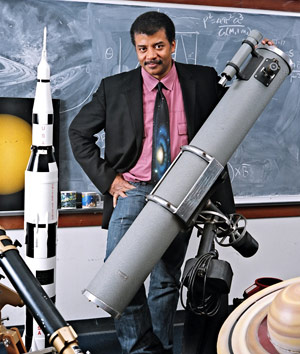 Dr. Neil deGrasse Tyson is the Frederick P. Rose Director of the Hayden Planetarium at the American Museum of Natural History and Visiting Research Scientist and Lecturer at Princeton University. Dr. Tyson is often known as  ‘The Man Who Demoted Pluto.’

Neil deGrasse Tyson was born October 5, 1958 in New York City as the second of three children. His father, Cyril deGrasse Tyson, was a sociologist and human resource commissioner for New York City mayor John Lindsay. His mother, Sunchita Feliciano Tyson, was a gerontologist. In 1972 Tyson attended the Bronx High School of Science where he captained the wrestling team and was editor-in-chief of the school's Physical Science Journal. Neil Tyson had an abiding interest in astronomy from a young age, obsessively studying it in his teens, and eventually even gaining some fame in the astronomy community by giving lectures on the subject at the young age of 15.

Already viewed as a protégé in science, Neil de Grasse Tyson was courted by Carl Sagan at Cornell, while deciding his college options. Eventually Tyson chose to attend Harvard over Cornell, where he majored in physics. He was a member of the crew team in his freshman year, but returned to wrestling, lettering in his senior year.

Dr. Neil deGrasse Tyson was appointed the Frederick P. Rose Director of the Hayden Planetarium in 1995. His research interests include star formation, dwarf galaxies, and the structure of our Milky Way. Tyson has authored nine books, including his latest, The Pluto Files: The Rise and Fall of America's Favorite Planet, chronicling his experience at the center of the controversy over Pluto's planetary status.

Tyson's professional research interests are broad, but include star formation, exploding stars, dwarf galaxies, and the structure of our Milky Way. Tyson obtains his data from the Hubble Space Telescope, as well as from telescopes in California, New Mexico, Arizona, and in the Andes Mountains of Chile.

Dr. Neil deGrasse Tyson has been the acclaimed host of NOVA scienceNOW since the launch of its second season. "NOVA scienceNOW is the only show on television that presents cutting-edge science stories in this exciting and fresh magazine format, and I relish the challenge of making science accessible and relevant to many different audiences," said Tyson. One of the world's most popular lecturers on astronomy, Tyson is a familiar face to NOVA audiences, having hosted the miniseries Origins on PBS in 2004, and having been a featured scientist in prior episodes of NOVA scienceNOW. Tyson is also a frequent guest on The Daily Show and The Colbert Report, where Stephen Colbert gave Tyson the title BFF (Best Friend Physicist) after his fifth appearance on the show.

In 2001, Tyson was appointed by President Bush to serve on a 12-member commission that studied the Future of the US Aerospace Industry. The final report was published in 2002 and contained recommendations for Congress and for the major agencies of the government that would promote a thriving future of transportation, space exploration, and national security.

In 2004, Tyson was once again appointed by President Bush to serve on a 9-member commission on the Implementation of the United States Space Exploration Policy, dubbed the Moon, Mars, and Beyond commission. This group navigated a path by which the new space vision can become a successful part of the American agenda. And in 2006, the head of NASA appointed Tyson to serve on its prestigious Advisory Council, which will help guide NASA through its perennial need to fit its ambitious vision into its restricted budget.

Tyson lives in New York City with his wife and two children. Tyson lived next to the World Trade Center and was an eyewitness to the September 11, 2001 attacks. He wrote a widely circulated letter on what he saw.

Dr. Tyson’s contributions to the public appreciation of the cosmos were recently recognized by the International Astronomical Union in their official naming of asteroid "13123 Tyson."